Just ask and you’ll learn that Steve Birchall thinks that the University of Wisconsin’s Department of Ophthalmology and Visual Sciences has been “music to his ears.”

Steve, a former music professor who has worn glasses since he was 12, has always had a creative mindset that has prompted him to see – or hear, or sense – small but significant distinctions in his daily life. As a result, his appreciation for all that the UW Health Eye Clinics offer their patients and the entire spectrum of expertise found throughout the UW Department of Ophthalmology and Visual Sciences is quite nuanced. 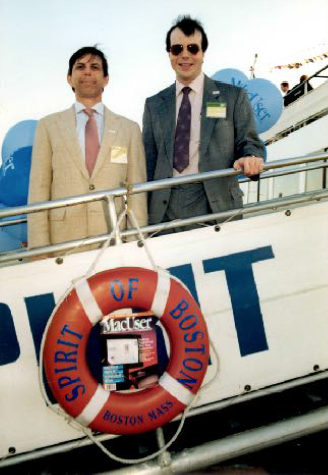 Steve Birchall (right) enjoys time in Boston while attending the Macworld Expo in 1984.

Steve’s story goes much further back than the moment, some fifteen years ago, when he was living in Rockford, Illinois and a friend recommended that he might want to make an appointment with UW Ophthalmology’s Dr. Gregg Heatley. Steve’s vision had long been something he was keenly aware of, and his feeling that his Illinois doctor was less than focused on his best outcomes had been distracting, if not downright disturbing. Fifteen years later, he’s absolutely certain he made the right decision. As he puts it, “It was surely one of the reasons I actually moved to Madison.”

Steve’s highly technical and varied life experiences can help us understand how – and why – he’s recognized certain distinctive professional characteristics of the Department’s extensive personnel.

Steve pulled lessons from when he taught music theory and an array of instruments. He then took his skills and sharply attuned ear to the then-burgeoning field of high-end recorded sound reproduction. He moved into selling this type of technical equipment in retail stores in the Boston area for several years, where his background gave him much success and a compelling rapport with customers. Later Steve went on to become an audio journalist, writing and editing publications called The Audio Amateur and Speaker Builder. He later worked at Softside magazine, which published lines of code which readers actually typed into their computers at a time when software for personal computers was not plentiful. After that, Steve became founding editor of Digital Audio which was aimed at consumers. When digital audio and CDs first entered the market, “the advance in sound quality was not a subtle increment, but was immediately obvious to most people. For me, as a musician, that was exciting because the goal of great audio is to reproduce the sound as accurately as possible.”

During his time teaching music, he spent his summers composing electronic music and in 1973 issued “Reality Gates,” an LP containing five of his works. He’s one of a tiny few patients who has actually produced his own album, which, if you looked hard enough, one could still find in the used LP marketplace. In a word, he’s reached for a multi-functional niche with his love for music and technology.

One might say that he could see it coming, long before he was actually diagnosed with a form of glaucoma. Even as he was undergoing repeated peripheral vision testing, he was mentally keeping track of his tested vision changes; as a result, he was prepared when he received the actual diagnosis. “But that wasn’t what made the difference in my eye health and care,” he further explains.

“The entire staff at UW is remarkably patient-conscious. From the welcoming individual who takes your eye pressures and makes notes for the about-to-follow doctors and residents who often accompany them at your appointments, there’s a genuine sense of concern for your well-being.”

Steve has noted the diversity of the DOVS’ staff, and thinks, among other positive things, that, “they all recognize the remarkable capabilities of these doctors. They don’t want to fail them,” whether in their specific roles or in making patients comfortable being there. “If I have questions about any aspect of my condition and treatment, Dr. Heatley always explains what I need to know with patience and in understandable terms.” 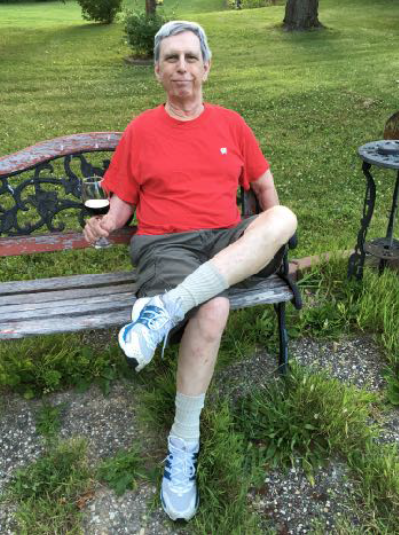 Steve at his brother’s home, relaxing in 2017 after successful cataract surgery at UW Health.

Steve Birchall’s opinions are the product of years of experiencing a dramatic range of professional vision services. “There’s a palpable sense of collaboration and a group knowledge at UW that gives a patient a true sense of satisfaction and a thorough understanding of his or her circumstances. As patients, we hope for and anticipate their focus on the big things; it’s all the attention to those little things that make this such a wonderful place.” Thanks to a great extent to UW Ophthalmology, his outlook is positive and his experiences have been rewarding.

And that is music to our ears!

Click to Learn About the Author, Russel Rothman, DOVS Advisory Board Member

Paul Kaufman, MD, To Be Honored With The 2018 Endre A. Balazs Prize