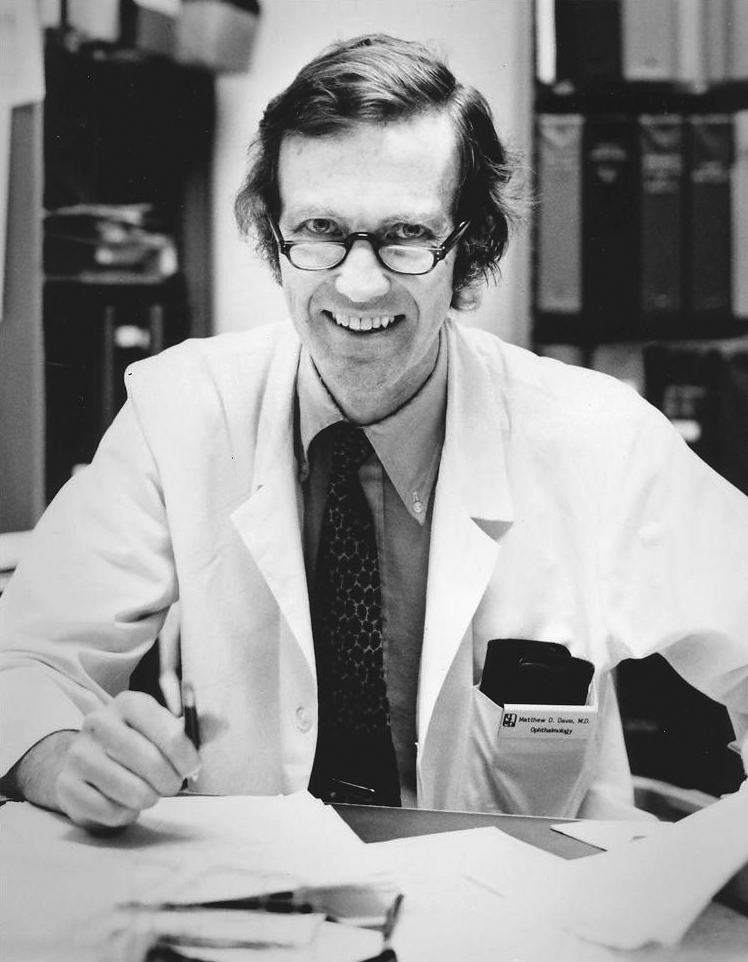 Dr. Davis’s major and enduring contributions to ophthalmology are pioneering collaborative multi-centered clinical trials and establishing the first ophthalmic photographic reading center at the University of Wisconsin-Madison. He demonstrated how clinical research should be conducted with discipline and rigor to ensure that the data collected are unbiased, accurate and reproducible.

Just as the National Eye Institute (NEI) was being formed, Dr. Davis chaired the groundbreaking Diabetic Retinopathy Study (DRS) which began in 1971. The results of this seminal study established scatter laser photocoagulation (panretinal photocoagulation) as the standard therapy for proliferative diabetic retinopathy, eventually reducing the risk of severe vision loss from proliferative diabetic retinopathy by as much as 95%. This major randomized controlled clinical trial, which was the first to be sponsored by the NEI, became the template for the conduct of future eye trials.

From the DRS to a number of NEI-supported clinical trials, Dr. Davis applied his usual intellectual rigor at the reading center to establish the Early Treatment Diabetic Retinopathy Study (ETDRS) Classification of diabetic retinopathy severity, a true gold standard that continues to be used decades later in trials of diabetic retinopathy. Similarly, Dr. Davis established the Age-Related Eye Disease Study (AREDS) Classifications of age-related macular degeneration and lens opacities that have also been considered gold standards for studies of age-related macular degeneration and cataracts. Dr. Davis has also inspired a number of medical students and other trainees to pursue careers as clinician-scientists, participating in the multiple facets of clinical trials.

As a native of Madison, Wisconsin, Dr. Davis attended the University of Wisconsin-Madison for his undergraduate degree and obtained his medical degree from the University of Pennsylvania. He returned to Madison where he completed his ophthalmology residency. His training was interrupted by two years of active duty for the US Naval Reserve. Following the completion of his residency, he received training at the Retina Service at the Massachusetts Eye and Ear Infirmary. Dr. Davis then returned to Madison, Wisconsin where he quickly rose through the ranks to become the Professor and Chair of the Department of Ophthalmology at the University of Wisconsin-Madison from 1970 to 1986 – during his tenure, the department gained full independent status, expanded residency to accommodate four trainees each year, and added nine more clinical faculty and two basic science researchers. Since 1996, Dr. Davis is Professor Emeritus at the Department of Ophthalmology and Visual Sciences University of Wisconsin Medical School-Madison and can still be found at the Fundus Photograph Reading Center most weeks, pursuing his passion.

Dr. Davis has published over 270 papers and book chapters. He has garnered numerous medals and awards in ophthalmology and medicine, including the Mildred Weisenfeld Award from the Association for Research in Vision and Ophthalmology, Award of Merit in Retina Research from the Retina Research Foundation, the Arnall Patz Medal from the Macula Society, the Alcon Research Institute Award, the Howe Medal from the American Ophthalmological Society, and the Castle Connolly National Physician of the Year Award.

Dr. Matthew Davis was most recently honored as the 2016 Academy Laureate at the American Academy of Ophthalmology (AAO) Annual Meeting for his seminal contributions to Ophthalmology including the establishment of gold standards for conducting clinical studies that have had major public health impact on the leading causes of blindness.