Mark Lucarelli, MD, FACS, was installed as the inaugural Richard K. Dortzbach Professor of Ophthalmic Facial Plastic Surgery, by department chair Terri Young, MD, MBA, at a ceremony held in conjunction with the annual oculoplastics course for residents and other learners in February. The endowed professorship is the culmination of an 18-year philanthropic effort that raised more than $550,000 in honor of Dr. Richard Dortzbach, affectionately known as Dortz 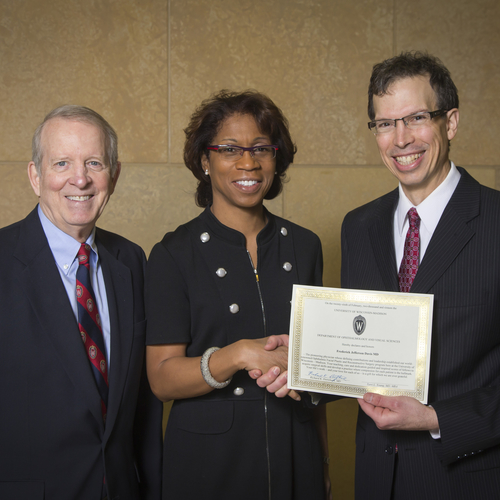 This new professorship honors Dr. Dortzbach, who performed an internship and ophthalmology residency at UW, and ultimately served as a faculty member in the Department from 1968 until his retirement in 1998. Dr. Dortzbach was the department’s first fellowship-trained oculoplastic surgeon, and he started the department’s Oculoplastics clinical service. “Dortz is an international academic and clinical rock-star,” said chair Dr. Terri Young. “The overwhelming response we received to create the endowed professorship is a testament to the indelible impact he made on our department.”

Recognized worldwide as an extraordinary teacher and mentor, Dr. Dortzbach trained 19 American Society of Ophthalmic Plastic and Reconstructive Surgery (ASOPRS) fellows. With the fellows and colleagues Drs. Bradley Lemke and Russell Gonnering, he produced numerous landmark publications on orbital anatomy and other subjects in ophthalmic plastic surgery. Dr. Dortzbach served in various ASOPRS leadership positions, becoming the organization’s president in 1995. After his retirement, as an Emeritus Professor he served as Executive Director of the UW Department of Ophthalmology and Visual Science Alumni Association until 2014.

Dr. Lucarelli is the Director of the Oculoplastics Service in the UW Department of Ophthalmology and Visual Sciences. “He has an impressive list of accomplishments, including authoring 111 peer-reviewed journal articles, several textbooks, 39 book chapters, and 6 digital publications,” said Dr. Young. He is also a leader nationally in ASOPRS, and has received many awards for academic achievement and teaching.”

Before formally presenting the award to Dr. Lucarelli, Dr. Young recognized Frederick J. Davis, MD, in absentia, with a certificate for establishing and continuing to support the department’s Oculoplastics Service. She also awarded a similar certificate to Dr. Lemke, who she said “initiated the award funding campaign to honor Dr. Dortzbach and to ensure continued excellence in Oculoplastics teaching and mentoring in the department.”

“Dortz shared many words of wisdom with his fellows,” said Dr. Lucarelli. “One of my favorite slogans was ‘Fellowship is 365 days. Make every day count.’ Another related favorite was, ‘carpe diem!’,” said Dr. Lucarelli. “The Dortzbach Professorship definitely motivates me to seize the day – past, present and most importantly into the future.”