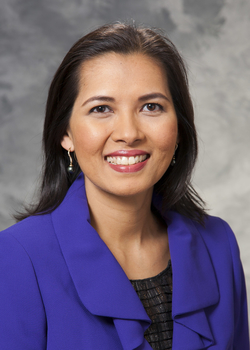 Yasmin Bradfield, MD, was promoted from Associate Professor to Professor, CHS, effective July 1, 2016. Dr. Bradfield joined the Department in 2003 as a pediatric ophthalmologist at the assistant level and was promoted to Associate Professor in 2008. She received a BS in Honors Biology, and Chemistry from the University of Illinois, Urbana, IL, and her MD from Northwestern University, Chicago. She served a transitional year internship at St. Joseph Hospital, Chicago; her residency at Mayo Clinic, Rochester MN, where she was chief resident; and a fellowship in pediatric ophthalmology and strabismus at Indiana University Riley Children’s Hospital in Indianapolis.

Recognized internationally for her clinical and surgical expertise in pediatric glaucoma, Dr. Bradfield has made significant contributions to the field of pediatric ophthalmology both as a clinician and a researcher. Her multicenter clinical study proposal run through the Pediatric Eye Disease and Investigator Group (PEDIG) led to an understanding of the relationship between corneal thickness and eye pressure in children. In this and other studies, she continues to demonstrate that children should not be labeled simply as little adults but require unique methods to manage their eye disease.

As a teacher, Dr. Bradfield has demonstrated a commitment to developing learners at all levels. She has served as Residency Director during two different periods, as associate residency director and was named Vice Chair of Education and Faculty Development in April, 2016. She has mentored more than 13 international fellows who spend several months each year observing in Pediatrics. As co-director of the Department’s International Ophthalmology Initiative, Dr. Bradfield is working to establish international exchanges with the University of Sao Paolo, Brazil, where she was a visiting professor in 2015, and in the Philippines.

About the Doolittle Professorship

Dr. Bradfield’s new academic rank will include designation as named professor. In a ceremony that included comments from Robert N. Golden, MD, Dean, School of Medicine and Public Health, Terri Young, MD, MBA, Chair, University of Wisconsin-Madison Department of Ophthalmology and Visual Sciences announced that Dr. Bradfield will receive the John W. Doolittle Professorship, effective July 1, 2016. John W. Doolittle graduated from UW Medical School in 1937 and was a prominent Madison ophthalmologist and consultant to the Wisconsin School for the Visually Handicapped in Janesville. His sister Helen was also a UW graduate and faculty consultant a bequest from her estate to the Department in memory of her brother. This gift helped establish the Dr. John W. Doolittle Professorship of 1996. The Professorship was previously held by Burton Kushner, Professor Emeritus, and former Pediatric Service Chief who was a mentor to Dr. Bradfield. The Doolittle Professorship serves to support the scholarly activities of “a successful and motivated researcher in the field pediatric ophthalmology,” according to the bequest.

Effect of topical latanoprost 0.005% on intraocular pressure and pupil diameter in normal and glaucomatous cats.