Featured News // News // Patient Care // Pediatrics // Dec 27 2016
After being in clinical practice for 40 years, Burton Kushner, MD, is not surprised to care for the children, and even sometimes the grandchildren, of his patients. It is not common, however, for a former patient to greet him in a coffee shop nearly 20 years after she last saw him. But that is what Tracie Bowers did several years ago. “I saw him and said ‘Dr. Kushner, you probably don’t remember me.’ He looked at me and said my name,” Bowers recalled. “It melted my heart.  He also remembered my twin sister, Tara Conger, and the specific kind of surgery he performed on both of us”.   Tracie and Tara both had an eye-muscle problem called strabismus. “Their eyes started turning in when they were 2 or 3 years old,” Jean Derbick, the girls’ mom said. “When they were little they had the classic ‘Coke bottle glasses.’” Jean sought advice and found a person who promised improvement with eye exercises. When that didn’t work, Jean asked other doctors in their Central Wisconsin hometown for a recommendation. That is how the family found Dr. Kushner. The girls visited the eye clinic in Madison a few times a year. 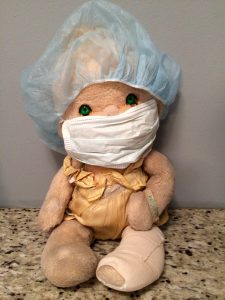 Even the twins’ doll, Patooty, “awoke” with a bandage after surgery

In old photos, Tara appears to have the more pronounced eye turn, but using patching and glasses she did not need to have surgery. Tracie was not so lucky and had surgery when she was 6 years of age. “I remember being so scared of the surgery,” she said. “I woke up afterwards and my favorite doll, who we called Patooty, was in my arms.  She had a surgical cap on and was bandaged. It made me feel so good.” The girls brought Patooty to every appointment, and to this day Tracie still has the doll, dressed as it was the day of her surgery 30 years ago. “We loved coming to Madison,” Tara recalled. “Our parents would say we had to come here and we would jump for joy.” Tracie added: “The appointments were so interactive. It wasn’t scary at all to see him.” So when Tracie’s daughter Ruby, 4, needed to have her eyes checked, Dr. Kushner was the first choice. He examined Ruby’s eyes a few times because pre-school testing pointed to potential abnormalities. Dr. Kushner said that, “because Tracie and Tara’s strabismus did not show up right away, it’s important to pay attention to anything that is concerning on screening exams.” Cases of strabismus are sometimes hereditary. In fact, Jean Derbick also had strabismus. She had eye muscle surgery as a young child and then again with Dr. Kushner when her twins were in high school. To learn more about strabismus, download Dr. Kushner’s book.