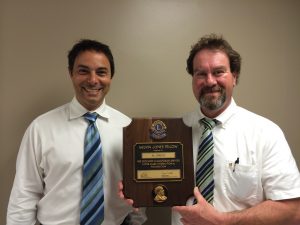 The Department of Ophthalmology and Visual Sciences lost a true friend and loyal supporter on June 12. Alfonso “Al” Greco, age 52, of Marshall, Wisconsin, passed away at St. Mary’s Hospital in Madison. Al was the owner and proprietor of Limo One, the service that transports doctors to distant outreach clinics. He was a tireless advocate of the department during more than 20 years he worked with us, logging thousands of miles safely transporting doctors to the Mauston, Rockford and Freeport outreach clinics and the former Woodruff and Dubuque clinics. When in Freeport, Al would spend his days volunteering in the Freeport Health Network hospital retina clinic. Al’s dedication to saving sight did not stop with his work with UW. He was the current president of the Cottage Grove Lions Club and recipient of the Melvin Jones Award, recognizing his exemplary individual charitable work.

Always warm, with a big smile on his face, Al connected with many Freeport patients enriching their experience at the clinic. In total, Al donated over 5,000 hours of his time to the clinic and hospital, for which he received an Outstanding Volunteer Award from University Hospital in Madison in 2009. Al’s kind spirit and generosity were felt by the entire department staff, with many doctors and administrative staff considering him to be an extended family member.

Al is survived by his wife Sherry and two children, Carmine and Christine. The consummate family man, Al was proud to work with his entire family, who also drove on occasion, especially his son, Carmine, who is carrying on his father’s tradition of service and support of doctors. We greatly value the dedication the Greco family has shown and the example Al has set for true selflessness. Al, we will miss you dearly.

Early-Onset Progressive Degeneration of the Area Centralis in RPE65-Deficient Dogs.