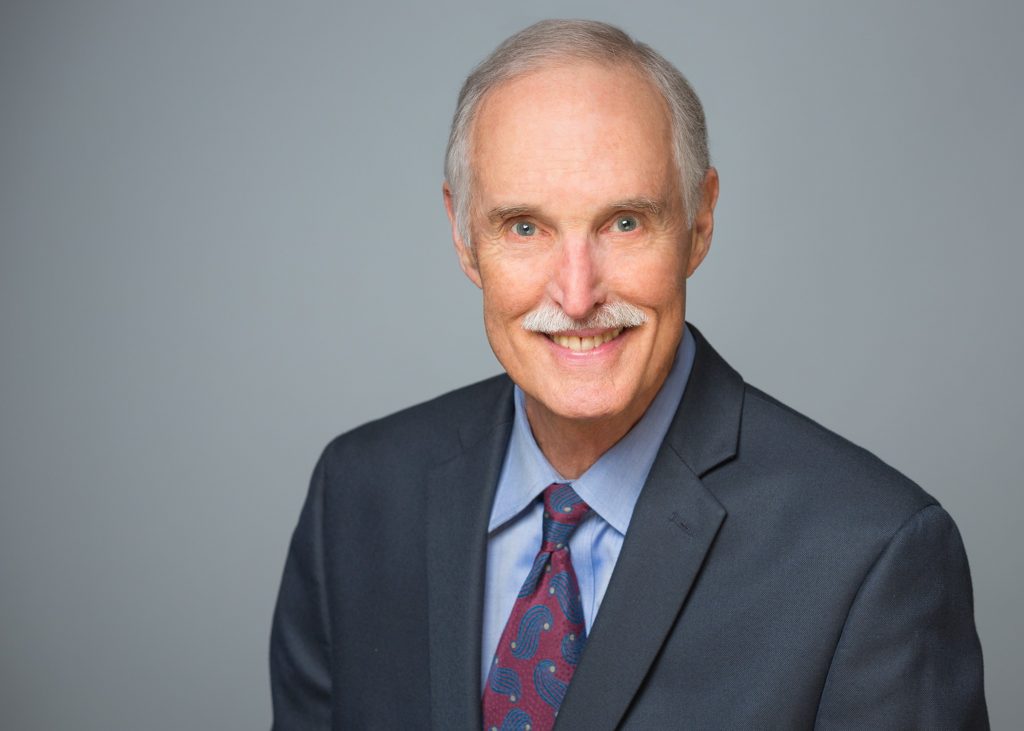 This year’s Distinguished Alumni Award recipient, W. Andy Harris, MD (Residency 1974), recalled his time at the University of Wisconsin Department of Ophthalmology and Visual Sciences (DOVS) fondly. And like so many others who trained at the DOVS, there was a common thread running through his experience — Dr. Matthew “Dinny” Davis.

After completing medical school at the University of Virginia, Dr. Harris did an internal medicine internship within the University of Wisconsin School of Medicine and Public Health (UWSMPH). During a month-long elective in the eye clinic, he felt like he had entered his life’s calling, stating that, “I walked into Nirvana.” He was thrilled with the ability to treat people on the spot and fascinated with the eye surgeries he participated in. When he approached Dr. Davis about pursuing an ophthalmology residency, it was January and the residency class was full for the upcoming year, 1970. Dr. Harris was worried about the war in Vietnam (something he was protesting on the streets of Madison), and knew he needed a plan.

Dr. Harris joined the Wisconsin National Guard, and Dr. Davis offered him a pre-residency fellowship with DOVS. This fellowship took him across the state, visiting hospitals and clinics to review charts for patients that met certain criteria for diabetic retinopathy studies. For those that qualified, he took fundus photographs, and patients received follow-up care through various studies with Jim Long (Residency 1976, Fellowship – Retina 1977) and many other colleagues.

Dr. Harris shared one of his greatest memories from his time at DOVS, the famed game of “Stump the Chief.” Residents would present slides on some of the most difficult cases they saw in clinic to Dr. Davis. “He was such a great observer. He was so honest about what he saw and what he thought. It was like being able to read his mind as he looked at the slides. It was everything.”

“Because I did this fellowship with him, he turned out to be the greatest mentor. If I could pick out one person who had an impact on my life besides my parents, it would be Dinny Davis,” Harris said.

Many faculty members contributed to Dr. Harris’s success at UW and prepared him extremely well for his career, which began in a Salem, Oregon clinic with two other ophthalmologists. “I did all of the strabismus in the clinic because of Tom France’s teachings. I did all the oculoplastics because of Dick Dortzbach. All the corneal grafts, thanks to Fred Brightbill. I did all the glaucoma surgeries for the group, thanks to Harry Roth,” Harris remembers.

“Andy Harris was an outstanding resident, collegue and friend while at the University of Wisconsin . As my senior resident I always found him to be helpful in solving the questions all new residents encountered on a daily basis. He was always willing to go the extra mile for patients and collegues alike,” said Rob Rymer, MD (Residency 1975), who nominated Harris for this award.

Dr. Rymer cites Harris’ international experience as part of the reason for the nomination, listing overseas trips Harris took to Ethiopia, Uganda, Sierra Leone, Sri Lanka, Moldova, India, China, Mexico and Labrador. Harris developed an interest in international medicine during his summers off while he was in medical school.

Harris shared that one of his favorite accomplishments in his work was in 1985, pairing Salem, Oregon as a sister city with Simferopol in the Crimea – one of about 150 pairings of US cities and similar cities in the Soviet Union during the Cold War. “I honestly think these exchanges collectively had something to do with the softening of the bellicose stance between the US and the USSR in those days,” Dr. Harris recalled.

It was when he retired from ophthalmology and gave up eye surgery that Dr. Harris realized he had lost “my main vehicle to work overseas.” He said, “I realized if I wanted to practice overseas, I would need to pick up a lot of other general medicine skills, infectious disease, public health and tropical medicine knowledge. That’s what led me to develop the program at Oregon Health Science University (OHSU).” The program, Professionals’ Training in Global Health, helps prepare physicians and other health professionals for volunteer opportunities in underserved areas of the world.

Dr. Andy Harris’ community and professional involvement is vast and includes serving on boards and committees focused on social responsibility, human rights, homelessness and environmental issues. He also served on the state and national boards, including a year as the national president of Physicians for Social Responsibility, which received the 1985 Nobel Peace Prize.

Beyond his years in Madison, Dr. Harris’s excellent work within his own communities and beyond for the global good exemplifies the Wisconsin Idea. DOVS is proud to honor him with the 2019 Distinguished Alumni Award at this year’s Alumni and Friends Reception at the American Academy of Ophthalmology Annual Meeting in San Francisco, California on October 12, 2019.

Make Your Eyes Part of a Healthy Aging Strategy