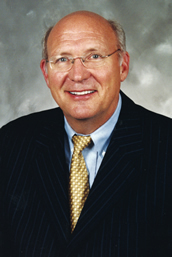 It is interesting to contemplate the career path that a young ophthalmology resident might take after his/her training in the specialty. Will they become an extra-ordinary cataract surgeon? Will they decide to further pursue sub-specialty training in disciplines such as uveitis or retina? Will a yearn to cure a disease inspire them to perform research on the subject? Which patient population will capture their interest: adults, children, urban, rural, international?

C. Thomas Dow, MD, did not limit himself to just one category. He recently spent time with the DOVS team to share memories of his training years at UW-Madison, and elaborated on how that experience influenced his career decisions.

Dow earned his bachelor of science degree in microbiology from UW-Madison in 1970, followed by a medical degree at the UW School of Medicine in 1974. His internship year was spent at Bronson Methodist Hospital in Kalamazoo, Michigan. He then returned to Madison to participate in the ophthalmology residency training program at the University of Wisconsin Hospital and Clinics, which he completed in 1978.

When asked about his time training in medical school and residency, Dow easily recalls rich memories. He recollects a second-year medical school ophthalmology class with Guillermo de Venecia, MD, the first full-time professor in the department. Dr. De Venecia’s ocular pathology research laboratory was down the hall from the second-year medical student laboratory. Dow remembers that while waiting for his roommate to finish his twice-weekly science laboratory commitment, De Venecia would stop in and talk with students, which created an air of ease and relatability. De Venecia invited Dow to his lab, where Dow became fairly knowledgeable about novel ocular pathology correlation research. De Venecia also demonstrated the proper use of an indirect ophthalmoscope to Dow.

When reflecting on the faculty, Dow notes Drs. Bresnick, Brightbill, Dortzbach, Kushner, Appen, and Allen as influential ophthalmology teachers during his residency training. He recalls Dr. Allen’s teaching approach of encouraging open-mindedness to using various surgical techniques. “Allen would get out his book of ophthalmic surgery and say ‘today we’ll do [surgery] this way, and the next time we’ll try it the next way.’

When asked how he approached learning surgical techniques, Dow notes that he was just happy to assimilate what he experienced. “Fred Brightbill was one of the top corneal surgeons in the country – he published a wonderful, nationally recognized book on corneal diseases and treatments. You try to take bits and pieces of your own expectations of how to do [surgery], and plug in the things that you learn from different people. Certainly, Fred was a terrific surgeon, as was pretty much everyone that I worked with there.”

Throughout our conversation, Dow seemed energized as he discussed his time with his educators. “Department Chairs Dinny (Matthew) Davis and Dan Albert each had a way,” Dow reminisced, “one word of encouragement from either would light a fire. Sometimes we forget the positive effect we can have on a young person early in their career.” Dow felt that the faculty consistently expressed confidence in the residents, which to Dow created a strong sense of comradery between the residents and faculty.

After completing his ophthalmology residency training, Dow established the Chippewa Valley Eye Clinic in Eau Claire, Wisconsin, in 1978. Dow grew the practice, eventually adding doctors and clinic sites in Menomonie and Rice Lake, as well as developing regional outreach locations. He performed the first corneal transplant and retinal reattachment surgeries in the state in Eau Claire, and convinced the Sacred Heart Hospital to purchase its first argon laser to treat specific retinal diseases.

Dow’s mentor, Dr. De Venecia, concurrently started formal charity work in the Philippines in 1978. De Venecia formed the Free Rural Eye Clinic in order to offer free cataract eye surgery to impoverished patients. When De Venecia called Dow to see if he had interest in volunteering, Dow stated that there was no way he could decline. He had young children at home, but went on his first trip to the Philippines before Christmas of that year. 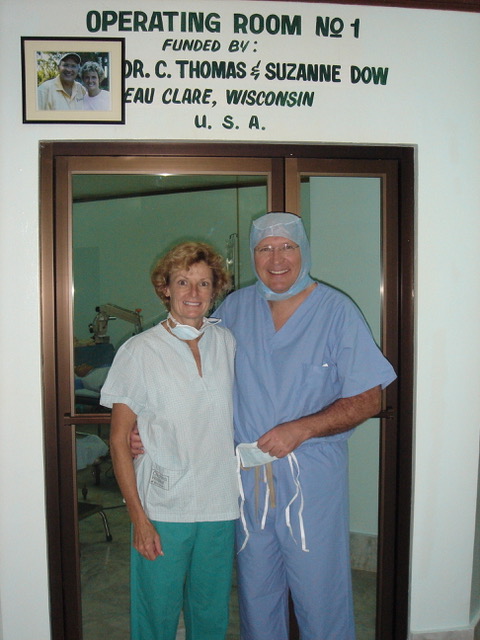 Dow recalls operating in six different hospitals on his first trip to the Philippines. It took hours to get started because of make-shift conditions, so it was a great accomplishment when De Venecia built a permanent outpatient surgical center in Dagupan to center his Free Rural Eye Clinic program in 2000. They performed 46 surgical cases in one record day, changing 46 lives. Overall, Dow completed 16 mission trips to the Philippines, often accompanied by his wife, Suzanne Dow, who served as a scrub nurse in the operating room suite. He performed 250 to 300 surgeries per visit. He has fond memories of each trip.

Dr. Dow had academic interests beyond his clinical and international work. Though in a private practice setting, his clinic encouraged exploration of areas of research interest; for Dow it was microbiology as well as age-related disease both of the eye and the brain.

The bacterium Mycobacterim avium ss. paratuberculosis is responsible for Johne’s disease, an inflammatory bowel disease of ruminant animals and the suspected cause of a similar human ailment, Crohn’s disease. Because of Dow’s work, this bacterium is also implicated in the autoimmune diseases Type 1 diabetes and Hashimoto’s thyroiditis. Dr. Dow recently co-edited a special edition of Medical Microbiology entitled “Mycobacterial Infections and Autoimmune Diseases.” He views this as a culmination of 20 years of work in this area.

The enzyme telomerase maintains the ends of our cells’ chromosomal DNA. Cell death occurs when the DNA that encodes proteins to maintain cell integrity and function no longer are produced for protection. Dow eventually partnered with a company to test a telomerase supplement in a patient group with age-related macular degeneration – an eye condition with cell death of the central part of the retina causing blindness in older individuals. The pilot study showed a beneficial effect.

More recently, Dow viewed a CNN report describing a novel method to diagnose Alzheimer disease (AD) using an eye test. As he puts it, “any ophthalmologist would be intrigued by that.” Research initiated at the University of Southern California Cedars-Sinai Medical Center found that amyloid protein accumulation in the retina mimicked the same type of abnormal collection in the brain – a hallmark of AD. Dow is now involved in studies utilizing the eye imaging test. The detection of amyloid in the eye “could become to Alzheimer disease what cholesterol testing is to heart disease. In the future, people will want to know their retinal amyloid score.”

Information on the Protocol

Dow served as the second president of the UW Ophthalmology Alumni Association, following Alice McPherson, MD – the first female ophthalmology resident trained in the department. Dow also served on the first UW McPherson Eye Research Institute Advisory Board from 2007 to 2010.

For the past 20 years, Dow has been included in the database “Best Doctors in America.” In 2007, Dow received the DOVS Distinguished Alumni Award. Peter Holm, MD, president of the Alumni Association at the time, prepared the presentation of the award. Part of Dr. Holm’s homework involved asking Suzanne Dow about her husband. Mrs. Dow described her husband in this way: “He is passionate about his patients, his community projects, and is the most optimistic person I know. He is a guy who sees the big picture and acts on it.”

It is fascinating to follow the trajectory of Dow’s career, ranging from an entrepreneurial private practitioner, cataract surgeon in the Philippines, to a researcher developing an eye test to diagnose dementia risk. “Who knows where your career will point you, especially towards the end when you have multiple experiences and a broad knowledge base,” Dow concluded.

Recurrent natural killer/T-cell lymphoma of the lacrimal sac and nasolacrimal duct in a 59-year-old Caucasian woman.