“How could I miss that?” was John Lenart’s first reaction when he struck out during a baseball game in August 2018. Lenart plays second base with the Racine Blues, an age-60+ team that is part of the Milwaukee Men’s Senior Baseball League (MSBL). While missing at bat is a regular part of the game, John was surprised because “I never strike out.”

Fast forward a few days later. John, accompanied by his wife Autumn and daughter Brea, was driving home after a game and visit to Mount Rushmore when he began experiencing double vision. John remembers thinking his sight was likely affected by cataracts and expected a quick fix before he could return to his usual activities. Instead, John, Autumn and Brea spent the next year trying to manage expectations and battled John’s depression when it was discovered that his visual symptoms were due to issues that were more serious. 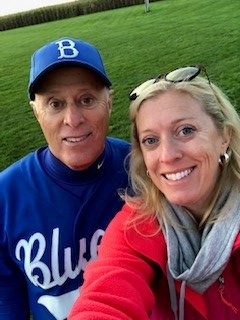 John Lenart and his daughter, Brea.

John, a physical education teacher and tennis professional, is passionate about baseball and America’s pastime plays a major role in his daily activity in retirement. He and Autumn travel annually to participate in the MSBL World Series tournament, which takes place in a variety of Major League Baseball teams’ spring-training stadiums. His double vision sidelined those activities, including a once-in-a-lifetime opportunity to play on the famed Field of Dreams in Dyersville, Iowa.

Doctors determined he had thyroid eye disease, an autoimmune condition that can cause eye dryness, surface irritation, and double vision due to enlargement and scarring of the eye muscle. A small percentage of people treated for overactive thyroid can develop these issues. While it doesn’t often lead to blindness, it can be very disruptive to daily activities. John had been diagnosed with hyperthyroidism three years prior.

John recalled times he couldn’t wait to go to sleep at night so he could close his eyes and get relief from the headaches his double vision caused. John was also self-conscious about the way the disease made his eyes bulge and did want to appear in public. Autumn said, “It was hard to keep positive.” John wanted to return to his normal routine, including driving, yard work and playing ball, again.

The first course of action was a bi-lateral orbital decompression, which is a surgery to remove fat and/or bone from the eye socket in order to increase space. When that didn’t completely provide the relief he sought, John was referred to Dr. Terri Young, chair of the UW Department of Ophthalmology and Visual Sciences and an adult strabismus surgeon. After trying prisms in glasses with limited success, the next step was surgery on his eye muscles to adjust his eye misalignment and address the double vision.

“They truly listened to what we said and knew what our goal was,” Autumn said of Dr. Young and John’s care team at UW.

Twelve months and two adjustable strabismus surgeries later to address complex horizontal and vertical misalignment of his eyes, John returned to his passion, baseball, but not just on any baseball field. He returned to the Field of Dreams. And John’s response? “I’m back!” 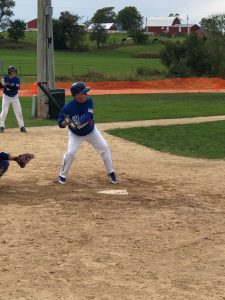 John Lenart at bat on the Field of Dreams in Dyersville, Iowa, in August 2019.

Persistent HCMV infection of a glioblastoma cell line contributes to the development of resistance to temozolomide.