Bob Holloway is a student of tools. Flashlights. Magnifiers. A white safety cane with a ceramic tip. “Attitude. That’s the most potent tool in my toolbox. I try to make it my go-to tool. A lot of tools are good for one thing. If you have a hammer, your problem better look like a nail. A wrench, it better be a bolt. But attitude is a multi-tool, and it handles a lot of stuff.”

Bob was born on Long Island but eventually ended up in Waukesha, Wisconsin, where he graduated high school. Madison has been home, at least part of year, since 1980. Bob has retinitis pigmentosa, a rare genetic disorder that is characterized by a loss of rod and cone photoreceptor cells in the retina, the thin layer of tissue at back of the eye. The disease can result in total blindness, with hallmark symptoms such as loss of peripheral vision and trouble seeing at night. He discovered he had the disease at 29 years old. Bob managed to live with the small changes in his vision for thirty years. But near his 58th birthday, the vision loss finally became significant enough that he gave away his car. He soon lost complete sight in his right eye and some sight in his left.

A few years ago, Bob’s optometrist recommended that he see Kimberly Stepien, MD, a retina specialist and co-director of the UW Health adult inherited retinal degeneration clinic. The optometrist’s mother had retinitis pigmentosa and so she was familiar with Dr. Stepien’s work.

Bob found Dr. Stepien to be a wonderful doctor, well-rounded in terms of professionalism, bedside manner, skills, knowledge, and communication. He became interested in her research and ways that he might support it. Bob reflected on discussions that he has had with Dr. Stepien and other department members. “I think they have been struck by the adaptations that I’ve made. They can’t know in a visceral way how one copes with visual impairment. There’s nothing negative attached to that statement. We should treat many more things in the same way that we treat gravity. I expect the chair I’m sitting in is not going to collapse. I expect that my shoelaces are not going to break. Most of our lives are just like gravity. It’s not like we can control it.”

That attitude keeps popping up during the conversation. Bob can quickly recall quotes by Abraham Lincoln and William James. “Most folks are as happy as they make up their minds to be.” (Lincoln) “The greatest discovery of my generation is that a man can alter his life by altering his attitude.” (James).

“If someone cuts you off on the freeway, you can get angry at them, but you’re only hurting yourself. But if you let go of it…it’s like gravity. With control you can choose the second one. If you’re not paying attention you can have the first experience.”

This outlook has propelled him to adapt tools and create strategies to navigate the world with less vision than the average person possesses. 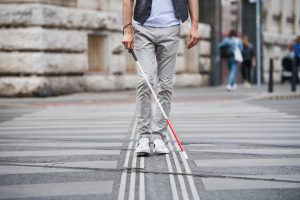 Bob first started using a white safety cane about 18 years ago. The Wisconsin Council for the Blind & Visually Impaired provides a free cane to blind or visually impaired Wisconsin residents every two years. The typical cane comes with a standard nylon pencil tip. That cane tip is very effective at finding cracks and nooks on walking surfaces, but Bob also discovered that this type of tip abruptly stops moving when it hits the obstruction, making it easy for his body to keep moving right into the cane. Bob instead uses a 5/8” or 3/4” ceramic tip on his cane. He finds that it rides over some cracks that the pencil tip won’t. The ceramic also makes a certain sound and has a certain feel because of the very hard material. “This is personal taste,” Bob points out, “I’m a believer in having a good tool.”

He is also a flashlight enthusiast. Bob used to actively camp, backpack, bike, kayak and rock climb. A flashlight was a handy thing to have, but as his vision loss progressed, he realized that the flashlights he usually used were no longer sufficient. He then came across a family of flashlights that could help: tactical flashlights. “I did a little research,” Bob explains, “and there is a whole subculture of people who thrive on all the minutia of flashlights. It made it easier for me to sift and winnow all of the information and come up with selections that would work well for my purpose.”

“In the dark, if you hold your flashlight at eye level, it’s going to be shining and, in a sense, see what your eyes would see. At one level, you think, ‘oh, that makes sense.’ But what your eyes are looking for is the contrast. At night, the contrasts are going to be shadows and lighted areas. If I am coming to steps, I carry the flashlight on my hip. The flashlight sees the edge of the first step, maybe the edge of the second step. My eyes will see a shadow. I’m not looking for the steps, I’m looking for the contrast. I’m using the flashlight to illuminate what is important. My mind doesn’t need to see the step, it just needs enough information and data to tell me where to put my feet.”

Bob points out that if he’s walking, it’s best to shine it on the ground but not directly where he is looking. Because in a pool of light, the brightest part will be in the center, right where he’s looking. “It’s small strategies like that,” he says, “that help me learn to live with these limitations.” Bob uses a flashlight to cross streets at night, shining it towards oncoming traffic so they see him. At times, he uses a blinking red light on his belt or a 10” reflective triangle. “Those things are never going to be a fashion statement,” he says, “but I got over fashion statements many years ago. It’s no different than a seat belt or bicycle helmet. You need things that you can adorn yourself with that will make you safer.”

“Tools have different characteristics,” Bob concludes. “Some are more advantageous in some situations than others. You learn how to use a tool, just like you learn to use a screwdriver or wrench. Attitude is the best tool I’ve got.”

If you or a loved one are experiencing vision loss, there are resources available to help.

The Contribution of Ototoxic Medications to Hearing Loss Among Older Adults.