On Labor Day, September 7, 2020, Kevin Blaser was fishing in the Rock River in Janesville, Wisconsin. His brother and a friend had met him at the river that morning. It was overcast, so Blaser’s sunglasses were propped on top of his head. He was reeling in a fish around 7:30 a.m. when the line broke. The sinker snapped back, hitting Blaser in his right eye. He immediately fell to the ground. His brother and friend rushed to his side, and the group reasoned that he should sit down for a few minutes. Blaser’s eye continued to water and his vision did not improve, so his brother and friend drove him home. Soon, Blaser was nauseous. He called his wife, and they rushed to Mercyhealth Hospital and Trauma Center in Janesville. The Mercyhealth team determined that Blaser should visit the UW Hospital emergency room and ophthalmologists.

Jennifer Larson, MD, assistant professor and comprehensive ophthalmologist, was on call that morning. She was the first to see Blaser. He had sustained traumatic hyphema – blood in the anterior chamber of the eye; iridodialysis – a separation of the iris from the ciliary body; and damage to his zonules, the ligaments attached to the ciliary body that allow the lens to change shape.

Dr. Larson and the emergency room team stabilized Blaser’s pain and vitals. The blood in his right eye and the damage to the drainage structures caused the intraocular pressure to rise, so Dr. Larson prescribed glaucoma drops to lower the eye pressure.

Dr. Larson referred Blaser to Sarah Nehls, MD, professor and cornea specialist, and Meisha Raven, DO, cornea fellow. Within two weeks of the accident, a traumatic cataract had formed in Blaser’s right eye. Blaser was prescribed prednisolone 1% topical steroid drops to reduce the swelling and inflammation. Blaser continued with the drops for three months, until the inflammation was reduced to levels that would accommodate surgery.

In a remarkable testament to Blaser’s spirit and determination, he quickly returned to his outdoor activities and work. Not wanting to miss out on the bow season, Blaser taught himself to bow hunt with his left hand and left eye. On October 12, just over a month after his accident, he shot the biggest buck of his hunting career. Blaser is a carpenter by trade and his new left eye and hand coordination allowed him to continue working too. To do all of this safely, he made a strong commitment to wearing eye protection based on his sports activities and work.

On December 3, 2020, Drs. Nehls and Raven performed the first surgery needed to repair Blaser’s vision, a removal of the traumatic cataract. He was fitted with an intraocular lens implant. Because Blaser’s zonular fibers were damaged, Drs. Nehls and Raven took additional steps to provide the best possible care and outcomes. A capsular tension ring, a flexible filament that stretches and stabilizes the capsular bag by redistributing forces from weak to intact zonules, was used. The femtosecond laser was utilized to assist in the removal of the capsule of the lens.

“The femtosecond laser was incredibly helpful because the anterior segment optical coherence tomography [an imaging test that uses light waves to take cross-section pictures of the retina] allowed us to make sure the capsule removal was centered given the loss of zonules,” Dr. Raven reported.

Capsular hooks were used to help stabilize the lens. Drs. Nehls and Raven also performed a planned anterior vitrectomy, or cleaning up of the vitreous fluid, in an attempt to leave the eye with a round pupil in the future.

Blaser returned for a post-op appointment the next day. The eye patch was lifted, and he was thrilled to find that the vision in his right eye had been restored. However, Blaser was disheartened when his vision became cloudier and cloudier in the following weeks. “The month of December, I was thinking the worst. I got nervous, and I figured it would be bad news when I went back in for my follow-up visit. But it turns out that my vision was 20/20. The blurriness was caused by scar tissue,” Blaser recalls.

Blaser returned for a second surgery on March 4, an iridodialysis repair, a procedure to repair his pupil and iris. He’ll return in April for a YAG capsulotomy, which will remove the scar tissue. As of right now, Dr. Nehls believes that Blaser will not need glasses. 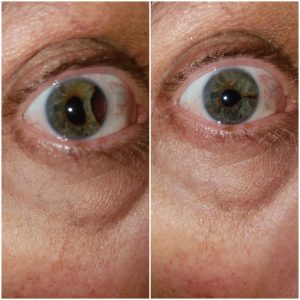 Blaser hasn’t fished since the accident. “It’s hard to explain,” he noted. “I have no issues with anxiety but the first month after the accident, even driving freaked me out.” Having the tenacity and grit to so quickly take on his passions with his left side, Blaser hasn’t let his accident ruin all the fun.

“Every time I go into the UW, they made me feel so comfortable. I walked in thinking the worst. And then everything went as smoothly as possible.” -kevin blaser

Generational Differences in the 10-year Incidence of Impaired Contrast Sensitivity.