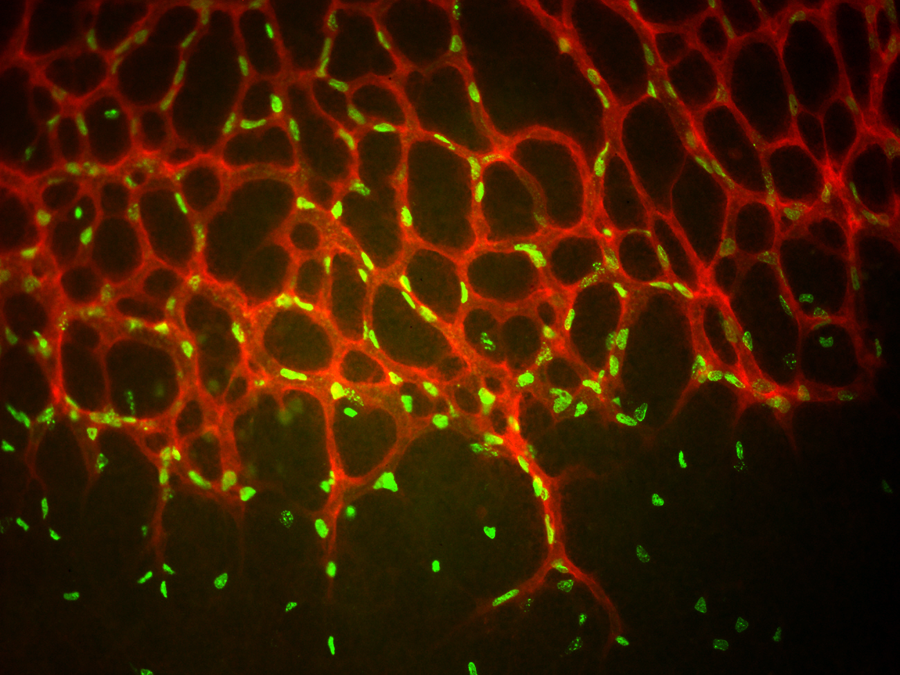 A research team of the UW Department of Ophthalmology and Visual Sciences has discovered novel mutations in a gene that are responsible for an important subset of childhood blindness called primary congenital glaucoma (PCG). Read the full article at PubMed.

The study, “Angiopoietin receptor TEK mutations underlie primary congenital glaucoma with variable expressivity,” was published in The Journal of Clinical Investigation on June 6, 2016. Dr. Terri Young, chair of the Department of Ophthalmology and Visual Sciences, is the senior author of the study performed at the UW School of Medicine and Public Health, and Stuart Tompson, PhD, a lead author of the study, is a UW associate scientist and a member of Dr. Young’s research team.

“In collaboration with an international team of geneticists, our results show that the TEK gene plays an essential role in eye health, and individuals carrying a mutation in this gene are at a much higher risk of developing newborn or later onset forms of glaucoma,” said Dr. Young.

Glaucoma is a condition that can cause vision loss when abnormally high pressure within the eye leads to optic nerve damage. PCG is a devastating inherited form of glaucoma that can present at birth through early childhood. Of note, the World Health Organization has reported that approximately 18 percent of children in institutions for the blind have early-onset glaucoma. Just as in adults, treatment options for PCG are supportive rather than curative. Many individuals undergo multiple eye surgeries, and are destined to a lifetime of applying eye medications in an attempt to decrease the intraocular pressure to normal levels.

The disease is poorly understood. Mutations in only a few genes have been linked to the disease, and account for only a minor proportion of cases. Mutations in the CYP1B1 gene are the most common cause of PCG in families with a high degree of marriage between relatives. However, it is a much less common cause in ethnically diverse populations. The researchers knew that a different mechanism must underlie the majority of these other cases, and set out to discover how that mechanism structurally alters the way the eye removes excess internal fluid.

The key risk factor for glaucoma is high intraocular pressure, which is thought to result from defects in how the aqueous humor, a renewed fluid within the eye, flows out. The Wisconsin researchers found that a key cell membrane receptor protein (known as TEK) is necessary for proper development of a drainage channel called Schlemm’s canal. If the receptor function is greatly reduced or absent due to a genetic mutation, the tubular canal is poorly formed or even absent, resulting in back-up of fluid and elevated eye pressure, which over time causes optic nerve head damage and subsequent visual field loss. Working with human patients, the UW team recruited families with at least one child with PCG, and identified 10 families that had mutations in the TEK gene. One family also had a parent with a diagnosis of childhood glaucoma, and another family contained several individuals with later-onset forms of the disease. All of the mutations identified in these families resulted in disturbance of the cellular signaling pathway necessary for Schlemm’s canal development.

“This is an important step in learning more about the biology of general glaucoma as well – a devastating eye disease that impacts more than 60 million people worldwide,” said Dr. Young. “Our discovery offers further insight into how eyes normally form a drainage system to avoid fluid build-up, and could aid in the development of new therapeutic strategies for glaucoma.” The clue to this connection came from teaming up with a Northwestern University research laboratory that studies mouse genetic models. “The collaboration with the Chicago team was critical,” said Dr. Tompson. “They engineered mice that contained mutations similar to those we had identified in our human patients. These mice displayed the hallmark signs of glaucoma and permitted the identification of defects in Schlemm’s canal underlying the disease in these cases. We can now perform prenatal genetic testing to determine who might be at risk and in need of earlier treatment before optic nerve damage can occur.”

The discovery was presented at an international vision research conference, the Association for Research in Vision and Ophthalmology, May 2016 in Seattle.