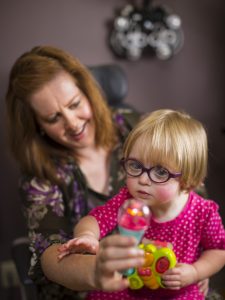 Eden Burgmeier, like any other toddler, loves to play with her toys. She will see a favorite toy in a corner and will crawl with glee to retrieve it. Eden did not always react to toys this way. “We knew that there may be a problem with her vision when she was born,” Andy, her father, said. “Her eyes were puffy and red. We thought it might be an infection.” It turned out to be something far more serious. Eden was later diagnosed with Axenfeld-Reger syndrome, both the corneas in Eden’s eyes were cloudy white and her eye pressures were elevated (glaucoma). Her only visual ability was light perception.

“When I ﬁrst met Eden’s parents, they told me they wanted to give their daughter the best chance of developing vision, but they also wanted to do the ‘right’ surgery,” said Dr. Yasmin Bradﬁeld, UW-Madison Professor of Pediatric Ophthalmology in the Department of Ophthalmology and Visual Sciences. Eden’s father has the same diagnosis and underwent several eye surgeries as a child. Eden’s parents had a strong understanding of her surgical options because of Andy’s ophthalmic history and their learned complexity of her eye condition. Eden’s parents sought multiple opinions nationwide before deciding to move forward with Dr. Bradﬁeld.

Eden was eight months old when she had her ﬁrst eye examination in the UW-Madison Pediatric Eye Clinic. With the same FOXC1 gene mutation as her father, Eden had severe abnormal development of the front structures of both eyes, including the corneal clouding, and further complicated by the glaucoma. Eden had never focused on her parent’s faces and seemed only to consistently stare at bright lights. “With my ﬁrst eye evaluation of Eden, I knew she needed surgery quickly to give her the best possible chance to develop vision. Because of rapid brain development at her young age, the more time that went by, the higher the risk she had of permanent vision loss. She would never appreciate a clearer image if she did not have that experience as a baby.”

Dr. Bradﬁeld consulted with her Department colleague Dr. Sarah Nehls, UW-Madison Associate Professor of Ophthalmology and Cornea Specialist, to develop a surgical plan for Eden. Dr. Nehls recommended cornea transplantation with a Boston type 1 keratoprosthesis to reduce the high risk of rejection and failure that is associated with traditional human corneal transplants in children. Keratoprosthesis surgery was favored because the corneal substitute “window” is made out of polymethyl methacrylate, an acrylic glass material that is well tolerated by the eye’s immune system. The implant is assembled intra-operatively and combined with human donor cornea tissue. The clear optic of the keratoprosthesis provides a lens that focuses light onto the neural retinal “ﬁlm” in the back of the eye. “Keratoprosthesis surgery is a new and exciting technology in the care of pediatric patients with vision-threatening corneal clouding,” said Dr. Nehls. “This device can more rapidly and predictably improve vision in pediatric patients.” Dr. Bradﬁeld also recommended performing a laser treatment called endocyclophotocoagulation (ECP) instead of conventional tube shunt surgery for eye pressure control. The laser speciﬁcally targets internal eye ﬂuid-producing ciliary processes without damaging surrounding eye structures.

Combining their subspecialty experience and expertise, the doctors formed a surgical plan to include a keratoprosthesis, lens removal, and ECP laser treatment. “The keratoprosthesis was specially ordered for Eden to take into consideration the expected future growth of her eye,” Dr. Nehls said. Eden underwent surgery of her right eye in December 2015. Almost immediately, her parents noticed an improvement in how she visually interacted with them and her surroundings. Her improved vision also led to better development of her motor skills. Eden’s father, Andy, recalls his joy at watching his daughter’s response to visual stimuli. “Before surgery, we never saw her crawl to get a toy,” he said. “There was no incentive – she couldn’t see where she was going.” Now, Eden deliberately crawls for her toys. “Being able to see even helped her crawl better,” Burgmeier said.