According to the Glaucoma Research Foundation, glaucoma is the leading cause of preventable blindness.  This month, the UW Department of Ophthalmology and Visual Sciences wants to help those in need receive more information about this disease.

Here are the facts about glaucoma: 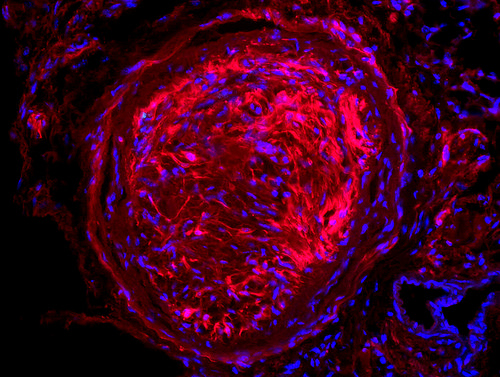 Microscopic view of a diseased optic nerve of a mouse with glaucoma, from the laboratory of Robert W. Nickells, PhD.

Glaucoma is a disease that causes vision loss due to damage of the optic nerve. The optic nerve is responsible for carrying the eye’s visual stimulus to the brain. While vision lost to glaucoma cannot be restored, the goal of treatment is to slow or stop the progression of the disease.

How does glaucoma occur?

The normal eye is continuously producing a fluid called aqueous humor. This fluid is responsible for keeping the eye nourished and filled to its proper size. In high pressure glaucoma, the drainage of aqueous humor is compromised, causing a fluid build-up that increases pressure inside the eye. This pressure leads to ganglion cell death and can be detected by checking a person’s vision for blind spots or peripheral vision loss.  In normal pressure glaucoma, the ganglion cells die as well, but it is not directly related to high pressure in the eye. Although vision loss is not immediately noticeable, over time, complete blindness can occur as there will be no effective transfer of visual stimuli to the visual cortex of the brain.

Are there different types of glaucoma?

The two main types of glaucoma are classified by how the eye’s drainage angle is affected. The most common type in the United States, primary open-angle glaucoma, occurs when the drainage angle is not directly blocked, but has lost the ability to drain effectively. This type of glaucoma causes no pain and is frequently without symptoms until it is very advanced. The other main type, angle-closure glaucoma, occurs when a person’s iris (the colored part of the eye) is unusually close to the drainage angle which leads a direct blockage. In about a third of cases, that type of blockage can happen suddenly. Acute episodes can be very painful and frequently require emergency medical attention. In most people, however, angle-closure glaucoma is chronic and builds up more slowly. As there are no symptoms, many do not discover they have glaucoma until they experience an acute attack, or until vision loss is severe in later stages.

What are the signs of an acute angle-closure glaucoma attack?

According to the American Academy of Ophthalmology, the symptoms of an acute angle-closure glaucoma attack are:

How is glaucoma treated?

There is currently no cure for glaucoma, nor can the damage it does be reversed. Your ophthalmologist will recommend medication or surgery to lower the eye pressure, which can slow or prevent further vision loss. The appropriate treatment will depend on what type of glaucoma you have. The most important thing to remember is early detection is vital to stopping the progress of the disease.

Your ophthalmologist or optometrist may prescribe eye drops to help lower your eye pressure. Different medications function different ways to reduce eye pressure. Some do so by reducing the eye’s production of aqueous fluid and others improve the eye’s ability to drain excess fluid.

Frequently glaucoma can be treated with laser surgery. These procedures can be done either in the ophthalmologist’s office or an outpatient surgery center. For open-angle glaucoma the preferred method of laser surgery is called a trabeculoplasty. The eye surgeon will improve the eye’s drainage of aqueous through the natural channels.  For those with angle-closure glaucoma a laser procedure called an iridotomy will likely be used. The laser will make a small hole in the iris to improve fluid flow and reduce eye pressure.  Your ophthalmologist may also consider improving the drainage of aqueous through an incisional surgery such as a trabeculectomy or glaucoma drainage device.

The best way to prevent glaucoma from stealing your sight is to schedule a comprehensive eye examination. If your ophthalmologist or optometrist finds you have glaucoma, a course of treatment can begin immediately to stop your vision loss.

Routine eye exams are especially important if you are in one of the higher risk groups for glaucoma. These factors include: