If you asked Elaine Archiquette to summarize her recent experiences with the University of Wisconsin’s Department of Ophthalmology and Visual Sciences (DOVS), she’d likely say it was a miracle. The doctors, staff and researchers of the UW DOVS might respond by saying “It’s what we do,” or “It’s all in a day’s work.” Regardless of those professional perspectives, Elaine’s view and attitude is the result of her unusual personal dedication, acknowledged denial and unexpected redemption. Maybe that’s where the miracle is found.

Elaine, a youthful 64-year-old, grew up in southern California. Several family members had glaucoma, including her mother and maternal grandmother, which not only made the disease familiar to Elaine but prompted her to expect that she’d likely develop it, too. To a degree, her awareness also fostered a somewhat casual attitude about it. She wasn’t dismissive of it, but she didn’t live with any kind of preoccupied concern either.

Elaine met and married her Wisconsin-native husband in the 1970s while attending Long Beach City College in California. As a young family, they moved to Sturgeon Bay, Wisconsin. Life circumstances took them back to California for the next decade. When Elaine’s husband decided to pursue an engineering degree they moved back to Wisconsin so he could attend UW-Madison. As Elaine put it, “the wonderful place that is Madison,” would ensure that she would choose to remain here even after she and her husband divorced. Years later Elaine met and fell in love with Tim. After seven years together, tragedy struck Tim in the form of a thoroughly debilitating stroke. He completely lost his ability to speak and was paralyzed on his right side. Elaine never wavered; she was determined to become his full-time caregiver.

Elaine had been diagnosed with glaucoma in her 40s and had been seen by Dr. Judith Fitzgerald, an ophthalmologist who provided what were then state-of-the-art glaucoma therapies. While these techniques helped Elaine, she admits to being negligent of her vision issues, telling herself they were too time-consuming. She thought she didn’t have time to deal with it, much less worry about it. Eventually, Dr. Fitzgerald retired and Elaine just mentally let it go.

Over a short period of time in the summer of 2018, her vision became a serious problem. As she now admits, her denial processes were working overtime. When she couldn’t see her TV, it had to be something wrong with it and she would have to buy a new one. Reading had become impossible, even with a huge magnifying glass. Driving had become dangerous. Not being able to see the dashboard to know how fast or slow she was going, or how much gas she had in her tank, were constants, and she worried that “If I couldn’t drive, how could I do what I needed to do every day to take care of Tim?” She finally stopped driving after realizing she had been trying to stay in her lane by following what she thought was either an ambulance or a bus.

In August of 2018, she broke down and called UW Health Eye Clinics. This marked a dramatic turn for the better for her vision.

Elaine told the person who answered the phone, “Something has happened with my eyes and I don’t know what to do.” To Elaine’s surprise, and momentary consternation, the person on the phone told her there’d been a cancellation for the very next day. Could she come in then to meet with Dr. Shilpa Reddy? That was when “the miracle” started.

What happened next was not what she expected. Not only did Dr. Reddy discover that Elaine’s eye pressure “was all the way up to 50!” (a consequence of her dangerously ignored glaucoma), but that additionally Elaine had developed substantial cataracts in both of her eyes. Dr. Reddy told Elaine that she would contact a couple of UW doctors who could perform both cataract surgery and a procedure to lower the elevated eye pressure caused by her glaucoma. By the following week, Elaine had her first appointment with Dr. Anna Momont, a UW DOVS cataract specialist. The outcome of that appointment was a plan to proceed with removing cataracts in both eyes and to perform a Kahook Dual Blade procedure to treat her glaucoma.

Elaine says, “That’s when an entire team of miracle workers went to work” on her behalf. Within just three weeks Dr. Momont had operated to remove the cataract in her right eye, and just two weeks after that Dr. Momont removed the cataract in Elaine’s left eye. “From the moment of my first call to UW Ophthalmology, to the moment I was released from my second corrective surgery was only five weeks! I went from my desperate situation to 20/20 with mildly corrective lenses. My glaucoma was under control to the degree that I only needed to take a single daily drop of medication for the foreseeable future.” 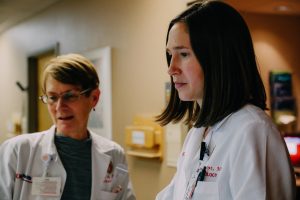 Today, less than a year after finally accepting that “something had to be done,” Elaine is filled with hope, gratitude and remarkably better vision. As she recently said, “It never occurred to me that anything like this was possible. The doctors may think what they want; I know it is a miracle!”

Researchers at DOVS are exploring the mechanics behind the development of glaucoma with the intention of finding better ways to treat and eventually prevent this disease in the first place. To learn more about glaucoma research, visit the Glaucoma Research Group.