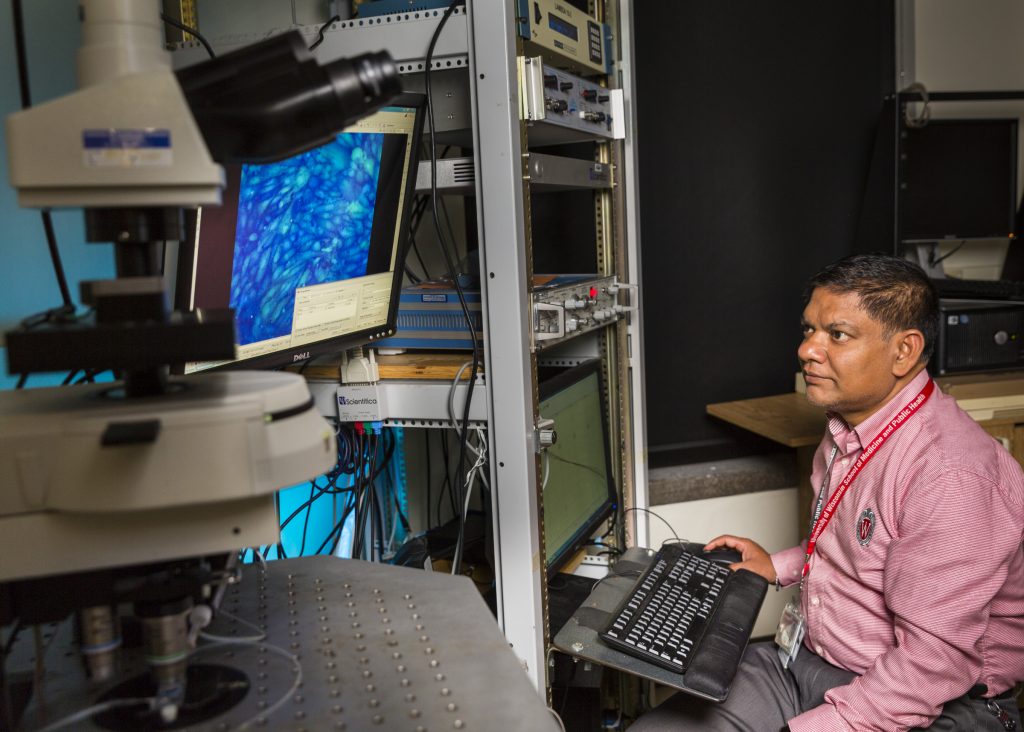 A research team at the University of Wisconsin School of Medicine and Public Health has shown that two novel approaches to treating an inherited eye disease were effective in restoring the function of a vital component of healthy vision.

The study, published in the Jan. 24th issue of the American Journal of Human Genetics, concerns a disease called Leber’s Congenital Amaurosis (LCA16), an eye disorder that affects the retina and causes severe visual damage that typically results in childhood blindness.  LCA affects two to three children per 100,000.  It can result from mutations in more than 20 genes that are expressed in certain retinal cells – specifically, photoreceptors (cells that are photosensitive and react to lightwaves) and retinal pigment epithelium (RPE), a layer of cells that lies just underneath the photoreceptors.

One such gene, known as KCNJ13, is responsible for producing a protein that is a potassium ion channel in the retina.  If the KCNJ13 gene is mutated, it cannot produce the protein correctly; consequently, the vital ion channel, which lets potassium ions pass in to/out of the cell, does not function properly.  And if the channel does not work properly, the photoreceptor cells cannot encode visual stimuli.  The result is a gradual progression toward blindness.

The UW group first created a ‘disease in the dish” model to test two possible approaches to treating blindness that results from mutations in the KCNJ13 gene.  First, they removed skin cells from two people in the same family.  One member had been diagnosed with LCA and had two copies of the mutated gene; the other had no symptoms and had only one copy of the mutation.  The skin cells were “re-engineered” back to an undifferentiated state and were analyzed.  Both types of cells appeared normal in structure.

But, when they matured, the cells from the LCA-affected person lacked the expression of the protein needed for the ion channel to develop and function.  The major disease-causing change affecting the retinal pigment epithelium was the lack of this functional channel.  The researchers now had a working model of the “disease in a dish.” The cells could not perform one of the key functions of the retinal pigment epithelium.

The team then tried to “rescue” the deficient ion channel through an approach known as “read-through therapy.”  The mutated gene contained instructions that short-circuit the process of translating DNA into a protein. The resulting protein is thus shorter than it should be. The “read-through therapy” in this case used an antibiotic (modified) to suppress the signal that stops DNA translation.

While only a portion of the cells completely recovered, the finding suggests that the approach shows promise for future treatment.

In addition, the team used gene therapy in the cells to try to re-establish a proper ion channel.  They used lentiviruses – a type of virus with a long incubation period – to deliver corrective genetic information to the affected cells.  The result was a functioning potassium current and a normal membrane potential – meaning that ions could move in to/out of the cell correctly.

“We have shown in a cell model that both treatments can restore the retinal cells to proper function,” said principal investigator Bikash Pattnaik, Assistant Professor of the Departments of Pediatrics, and Ophthalmology and Visual Sciences at the School of Medicine and Public Health, and an investigator at the McPherson Eye Research Institute.  “This is an important proof of concept for these approaches and gives us hope for the value of precision medicine for pediatric blindness.”

The research was supported by the University of Wisconsin Foundation, the National Eye Institute, the UW Vision Core Grant and the Retina Research Foundation M.D. Mathews Professorship.

Assistant Professor of the Departments of Pediatrics, and Ophthalmology and Visual Sciences at the School of Medicine and Public Health, and an investigator at the McPherson Eye Research Institute